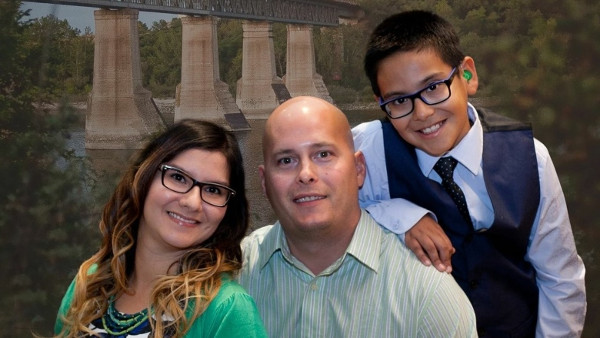 Twelve-year-old Zachary Baptiste and hundreds of other children across Saskatchewan will be harmed if the provincial government follows through on its plan to axe the hearing aid plan July 1, says his mom, Claudia. (submitted)

Deaf and hard of hearing children and their parents are planning to protest government service cuts today at 4 p.m. CST in Saskatoon.

Meanwhile, an online petition against the cuts started by Saskatoon high school student Mary-Jayne Morris has attracted more than 1,500 signatures.

’I will be living a life in silence’: Sask. teen speaking out against cuts to hearing aid program

The provincial government announced on budget day last month that it would phase out the hearing aid plan in order to save $3 million.

Claudia Baptiste said elimination of the plan will hurt her 12-year-old son, Zachary, and hundreds of families across the province.

"I’m a parent of a child that has severe hearing loss. For me, the cut to the hearing aid plan is just ... it’s very sad. It’s such a needed, needed service," said Baptiste, president of the volunteer advocacy group Saskatchewan A.G. Bell.

The government says the private sector can fill the need and low-income families will still receive benefits and subsidies.

Private audiologists agreed with the government in a news release issued Thursday. They said A.G. Bell is spreading "misinformation."

Groups accuse each other of spreading misinformation

"Public sector and private audiologists, along with groups like A.G. Bell should instead be focused on working with the government of Saskatchewan to ensure that services remain focused on the patient, and not on providers," stated the release, signed by 11 private sector audiologists from cities around the province.

Baptiste and others say the government and the private, for-profit companies are the ones spreading misinformation, and issued their own statement.

"Saskatchewan children’s communication skills will be at risk, which in turn will affect their literacy levels, academic success and social & emotional well-being," said the A G Bell statement.

They note Saskatchewan has fewer public audiologists per capita than any other province. It’s one of the only provinces without comprehensive hearing tests for newborns. And it received one of the worst grades in a recent national study for its treatment of the deaf and hard of hearing.

The protest takes place outside the Hearing Aid Plan offices at the Sturdy Stone Centre on Third Avenue.
The cuts are due to take effect July 1

Read the original article on cbc.ca