Fierce Debate Over Sign-Language Use by Some Deaf Students


New research is stirring fierce debate over the use of sign language among young deaf children who use surgical implants that create a sense of sound.

The study, published in the journal Pediatrics, suggests that the long-term use of sign language holds back the speech and reading skills of children who use devices known as cochlear implants. These implants bypass damaged parts of the ear and send electrical impulses directly to a user’s auditory nerve.

Supporters of sign language, on the other hand, say that a visual language is an essential foundation of literacy for deaf children, even for those who use cochlear implants.

Pediatrics has published a flurry of critical responses to the study since it was published in June. The lead author has added her own lengthy counter-response, addressing what critics say were the weaknesses of the study’s design. Outside of the research realm, parents of deaf children are hashing out the findings on social media and comparing them to their own experiences. 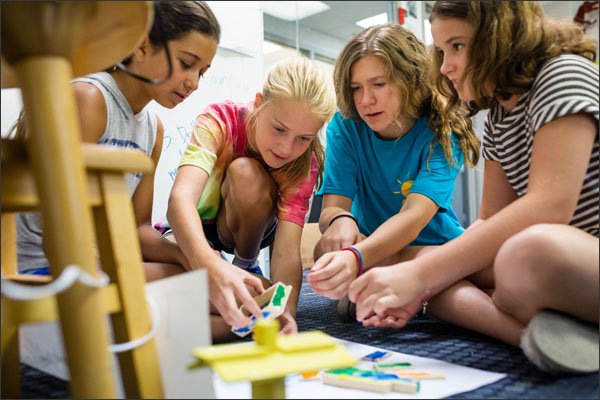 Grace Kowal, 15, right, with her mother, Hendi Crosby Kowal, is part of a controversial study on deaf children. 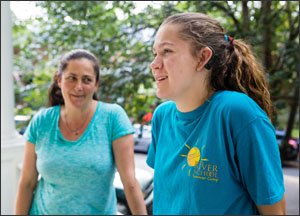 Grace Kowal, 15, right, with her mother, Hendi Crosby Kowal, is part of a controversial study on deaf children.

Hendi Crosby Kowal, whose daughter Grace, 15, is among the children studied for the Pediatrics report, communicates with her daughter almost entirely through spoken English. But before Grace received her implant at the age of 11 months, Kowal said she used sign language-and she doesn’t regret it.

"It was really good to feel like I was doing something with her until she could access sound," she said. The study, she said, seems to discourage that.

For Carol Katarsky, a Philadelphia mother of a 3-year-old son with cochlear implants, the findings offered a sense of relief. She said she has felt some pressure to use sign language with Nicholas, who received his cochlear implants a day after his 1st birthday. But she had struggled with learning the complex visual language, and within a few months of the implants’ activation, Nicholas stopped signing. His mother followed his lead.

"If the only deaf person in the family doesn’t want to sign, I don’t see a lot of benefit to spending a lot of time with it," she said.

And in her son’s preschool, which focuses on developing listening and spoken language skills in deaf children, she said it’s her sense that children who focus solely on oral language master it better than parents who use a mix of oral communication and sign language. Katarsky is not against the use of sign language, however.

Every year, around 10,000 children in the United States are born with some level of hearing loss, most of them to hearing parents. The majority of those parents opt for cochlear implants for their children with severe or profound deafness. While the devices are approved for use in children at 1 year old, some surgeons are performing cochlear implant surgery in children several months younger.

The study found that 70 percent of children without sign language exposure achieved age-appropriate spoken-language skills, compared with 39 percent of those exposed to sign language for three or more years.

All of the groups had reading comprehension scores that were on par with hearing children while they were in early elementary grades. In later elementary grades, however, children without sign language exposure had a statistically significant reading advantage over children in the long-term sign group.

The differences between visual language and oral language could be the reason, said the study’s lead author, Ann Geers.

How Does a Cochlear Implant work? 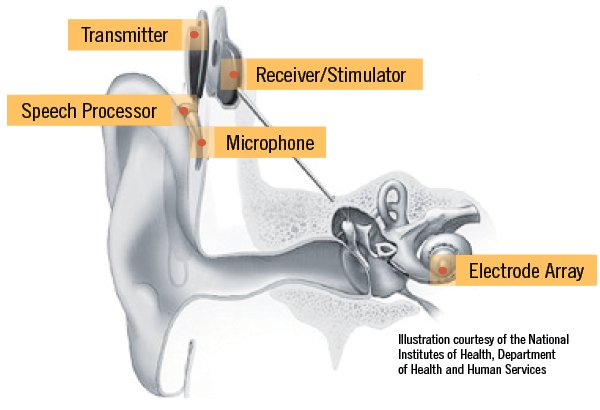 How Does a Cochlear Implant work?

«A cochlear implant is a biomedical device that provides a sense of sound to people with severe-to-profound hearing loss. Audiologists, speech-language pathologists, and others play key roles in teaching users how to maximize their use of the devices. The device, which is surgically implanted in the cochlear, or auditory, nerve, includes:

A microphone, which picks up sound from the environment.

A speech processor, which selects and arranges sounds picked up by the microphone.

A transmitter and receiver-stimulator, which receive signals from the speech processor and converts them into electric impulses.

An electrode array, which is a group of electrodes that collects the impulses from the stimulator and sends them to different regions of the auditory nerve.»

Source: The National Institute on Deafness and Other Communication Disorders

"Lots of literature has come out saying that if you can get sign in very early, it will help bootstrap spoken-language acquisition," said Geers, a research professor and developmental psychologist at the University of Texas in Dallas. "It just didn’t come out that way in practice."

Parents who are signing frequently with their children may not be providing them all the auditory stimulation they need to maximize the use of their cochlear implants, she suggests. Unlike putting on a pair of eyeglasses, using a cochlear implant does not confer an instant benefit-it requires continuing speech and auditory therapy for children to make the most out of the devices.

The study does not focus on children who have deaf parents, who presumably use sign language fluently. For children who have hearing parents, its understandable that parents "want you to grow up with the language they use, and they want you to join their society," Geers said. "It’s achievable for most kids, if you start early enough."

Peter C. Hauser, a deaf clinical neuropsychologist, said that Geers and her colleagues are making unjustified and sweeping conclusions in the study that run the risk of depriving children of language.

"Too often, we see parents, educators, and medical professionals being overly optimistic that a deaf child will learn speaking and listening skills," said Hauser, who is the director of the Center on Cognition and Language at the National Technical Institute for the Deaf. The institute is housed at the Rochester Institute of Technology in New York.

Some children do develop speech and language skills with cochlear implants, Hauser said. Others, however, do not. And when educators and professionals then suggest learning a sign language, "it is often too late, as the language acquisition critical period is passed. The child will end up having some non-native language difficulties that has long-term consequences on their education and well-being," Hauser said.

Literacy at the Forefront

Hauser and other critics of the study also noted that it did not attempt to measure parents’ facility with sign language. In the study, all types of sign language were grouped together, including American Sign Language and a number of variants that may use fewer words and simpler, or no, grammar. If parents have rudimentary signing skills, that could play a role in how well their children are gaining spoken English and literacy skills, Hauser said.

Geers said that the point of the study was to meet parents where they are, and that sign language proponents have argued that any use of sign language can be helpful for children. Her findings suggest otherwise, she said, though short-term signing doesn’t appear to be detrimental. But the goal should be to have children focus on the face and mouth, not the hands, she said.

The study’s findings arrive when language and literacy acquisition are at the educational forefront. The Thirty Million Words Initiative, an advocacy effort built around getting more parents to have meaningful conversations with their children, is directed by Dr. Dana Suskind. Her interest in the issue was driven by her work as a cochlear implant surgeon. Another grassroots effort, Language Equality and Acquisition for Deaf Kids, or LEAD-K, is working to ensure deaf children are exposed both to American Sign Language and to English.

Not all parents see speech acquisition as a primary goal, even if their children use implants.

Jennifer Redmore, who lives in Binghamton, N.Y., has a 5-year-old daughter with cochlear implants. After misdiagnoses as a baby, her daughter Ann received her implants at 27 months. Ann uses American Sign Language as her primary mode of communication, with her local school district providing speech therapy and an interpreter at the Catholic school she attends.

Redmore has an unusual perspective-her own mother is postlingually deaf, meaning that she lost her hearing after she learned to talk. For her, Ann’s speech development is important, but not as important as gaining access to language and literacy.

"I don’t think there’s a downside to being bilingual," Redmore said. "We always felt that communication and language and literacy are what are important for Ann and for us, and speech-we’ll get there."

Grace Kowal, one of the children tracked through the study, could be a poster child for early intervention. Though she used sign language as a toddler, she was enrolled as a child in a private Washington, D.C., school, the River School, which provides a rich auditory environment for young children with cochlear implants. About 10 to 15 percent of the student body has hearing impairments, and the rest have typical hearing. The program served as a "total immersion" program for speech and hearing.

There, she learned that "it was completely normal for you not to be able to hear as well as your peers. It let me accept myself as I was." And it also taught her how to advocate for herself.

Grace, a lacrosse-loving rising 10th grader, is fully mainstreamed in her public District of Columbia high school, and her speech and literacy is on par with, or exceeds, that of her hearing peers.

But, she said, "I hope the Pediatrics article doesn’t persuade parents not to sign with their kids."